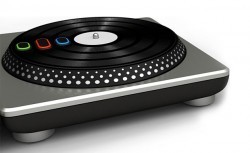 8th June 2010 - Activision have confirmed today that DJ Hero 2 will be appearing this fall. Their official press release is as follows:

This fall, living rooms will transform into nightclubs letting budding beat chemists, singing sensations and all of their friends party together by firing up two turntable controllers and a microphone to experience their favorite music as they've never heard it before in Activision Publishing Inc.'s (Nasdaq: ATVI) DJ Hero(R) 2 - the follow-up to the #1 new videogame intellectual property of 2009, DJ Hero(R). Picking up where the award-winning DJ Hero soundtrack left off, DJ Hero 2 spins together the hottest tracks blazing up the charts and legendary club anthems from the biggest artists in pop, dance and hip hop including Dr. Dre, The Chemical Brothers, Kanye West, Metallica, Lady Gaga, Rihanna and over 85 others. Fueling the party will be a host of all-new social multiplayer game modes and innovative freestyle gameplay giving virtual DJ's the ability to crossfade, scratch and sample in over 70 speaker-blowing mashups from the hottest DJ's and Producers around the world, including Deadmau5 - part of dance music's elite - who will be starring as an in-game playable character.

To celebrate the announcement, DJ Hero owners and all of their friends will have the opportunity to download, spin, scratch and battle a mix from DJ Hero 2 as downloadable content. The mix features the sultry sounds of Lady Gaga's "Just Dance" Mixed With the blistering beats of Deadmau5's "Ghosts 'n' Stuff." The mix will be available for free from June 8-14 on Xbox LIVE(R) Marketplace for Xbox 360(R) video game and entertainment system from Microsoft and PLAYSTATION(R)Store for the PLAYSTATION(R)3 computer entertainment system.

"DJ Hero was the best music game of 2009 and with DJ Hero 2 we're delivering a new easy to pick-up, challenging-to-master experience that all players can enjoy together," said David Haddad, Chief Operating Office, Guitar Hero. "With new social game modes, the inclusion of full microphone support, all-new levels of creative freedom and an amazing soundtrack, DJ Hero 2 is the ultimate mixer of music and friends."

"We're improving upon all the gameplay elements from DJ Hero that gamers loved with the all-new freestyle gameplay and a host of new multiplayer game modes," said Jamie Jackson, Creative Director, FreeStyleGames. "But we're not stopping there either as the award-winning soundtrack is getting bigger songs from hotter artists that our talented crew of DJ's is spinning into hits that fit the gameplay flawlessly."

DJ Hero 2 will deliver the ultimate way for players to come together and party with a host of new multiplayer modes - including DJ Battles that pit DJ against DJ in mixes produced specifically for battle gameplay - and invite vocalists into the spotlight with integrated on-screen singing and rapping of lyrics and rhymes while bringing the party to life with jump-in/jump-out Party Play gameplay. Featuring the biggest dance, pop and hip-hop hits by the hottest artists everyone knows and loves remixed by world-class DJ's in an all-new way, the game's soundtrack delivers over 70 unique creations only available in DJ Hero 2. Further immersing players into the music, the game offers a heightened level of creative input and allows everyone to add their own touch, directly impacting the beats they're spinning with freestyle scratching, crossfading and sampling. The game will also feature an all-new career-based Empire Mode where players start out as an up-and-coming DJ on the road to becoming the head of a major entertainment empire, all of which is founded solely on their success as a DJ.

Dropping this fall, DJ Hero 2 will invite a wave of new digital disc jockeys to the turntables as the game will be available as a Party Bundle which will include a copy of the game, two turntable controllers and a microphone, offering the ultimate "party-in-a-box." Gamers who experienced the #1 new videogame intellectual property of 2009 can pick up DJ Hero 2 as a Turntable Bundle featuring one turntable controller and a copy of the game or as standalone software. The game is in development by FreeStyleGames for the Xbox 360(R) video game and entertainment system from Microsoft, the PLAYSTATION(R)3 and the Wii(TM) system from Nintendo. The game is not yet rated by the ESRB. For more information about DJ Hero 2, please visit www.djhero.com,facebook.com/djhero and twitter.com/djhero.