Gordon Freeman, Marcus Phoenix, Master Chief. All household names synonymous with AAA titles and a fictional fan base to boot. But what about their sidekicks, the oft overlooked associates that prop these heroes up in times of need? Barney Calhoun, Leon and now, the Orbital Drop-shock Troopers.

Almost two years since the inception of Halo 3, and the same year as the hit and miss ‘Halo Wars’, Bungie is about to unleash another installment on the ravaging masses. Curiously, despite all attempts at stopping the Halo juggenought, this is ‘apparently’ the second to last Halo game; before the mysterious Halo Reach ends it all. What it offers is a curious mix of survival horror, mystery and stock FPS ala Halo that fans have come to love.

Assuming the role of a titular Orbital Trooper; the city of New Mombasa is yours for the exploring. Set somewhere between Halo 2 and just before the events of Halo 3, the whole game revolves around finding your dead team mates and piecing together what happened to them. 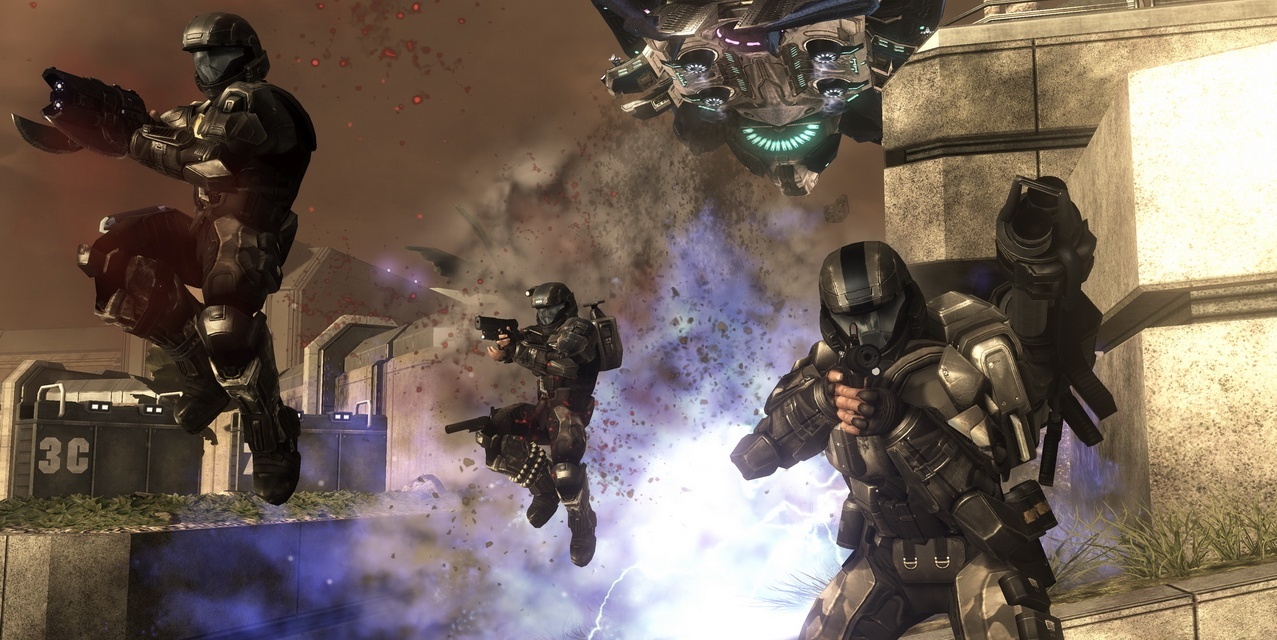 Already you can see what Bungie is aiming for. With Halo 3 single player, criticized for its linear, set piece approach to action, Bungie have tried to infuse some multiplayer elements as well as non-linear navigation in an attempt to make it feel current. This is surmountable to GTAIV leaving out key content and gameplay, only to release it six-months later in the form of downloadable episodes.

Searching for your dead comrades involves scouring a rather large map, in any order you wish at which point, having acquired your target, you enter a flashback mode and complete stories explaining said cause of death.

If this sounds familiar it is because, try as they might, Bungie always seems one step behind the curve in gameplay. What they have managed to do though, is inject some survival horror elements from games like FEAR with the ‘hoorah’ team squad from so many other games into an otherwise standard expansion: In fact considering Bungie is pushing this out as an ‘almost’ full sized retail game, the detective mode of uncovering clues and collectables on your fallen partners may be the only justifiable reason to pay full price.

Perhaps the most notable feature is that in ODST, unlike the Master Chief, there is a real sense of fighting in a team with support and backup. Four player co-op allows some interesting options for gameplay, though it should be noted that your ODS Trooper has no name, identity or back-story besides the call sign: “Rookie”.

The co-op elements is incorporated into the ‘new’ firefight mode which is the similar to Gears’ Horde mode or any other ‘wave’ gameplay type that seems to be staple these days. However, unlike Gears’ Horde mode, the firefight mode will not have live matchmaking capabilities or servers, meaning you will need a LAN or people on your friends list to play it.  Multiplayer is identical to Halo 3 and includes all the same maps (again) plus the ones you didn’t pay for with only 3 new exceptions. As well it is not possible to play as an ODS Trooper in mp.

Microsoft may be promoting a game almost the same size as other Halo games, but is the content any different two years on; fan boys will eat it up regardless but Modern Warfare 2 is not far off. For some, September 22 can not come fast enough, for the rest its just one more trip into the bottomless pockets of Microsoft’s marketing.

4. Something other than Master Chief

2. Will the graphics be any improved?

4. Still linear, despite some choice in order

Previewed and Written by Ian Crane